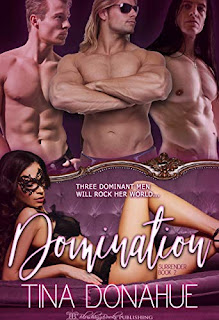 Surrender might be a wanton Malibu club, but it’s

hardly fun and games for Jacquie. As the owner’s

assistant, she’s all work and no play. That changes

as a provocative idea for their new album.

As the frontman for Dominant Men, Max is lusciously

a willing sub. Backup singer and lyricist Andy is more

laid back. However, his wild, reddish locks hint at the

fire within, which he proves in bed. Entertainment

devil’. To him, vanilla sex is for when you’re too old to
make the effort. The more daring the play, including


Ready to live, Jacquie offers to be their carnal guide

through Surrender, willingly delivering herself to

these sexy beasts for an adventure like no other.

This is book two in the Surrender series but can be

enjoyed as a standalone

Publisher’s Note: This steamy, contemporary, reverse harem romance is intended for adults only. It contains elements of sensual scenes, power exchange, and adult language. If any of these offend you, please do not purchase.

My freaking god. This is actually happening.

Max entered first, pure alpha, his features rough, grin mischievous, his freshly washed hair dancing over his shoulders, his stubble tempting as hell. Tonight, he wore a dark blue suit, a sapphire shirt, and matching tie. Totally hip. At twenty-nine, he was male to the extreme.

Bree rattled the papers to catch Jacquie’s attention for the performance she suggested.

No good. Jacquie couldn’t look anywhere except at him. To keep from throwing herself into his arms and ruining her badass-chick act, she dug her nails into her palms.

His gaze zipped down her, crawled back up, settled on her cleavage for a long, long while then inched up to her mouth, where he also lingered, then met her eyes.

Male interest sparked in his, his grin widening.

Warmth poured through her, followed by certainty she’d rarely known. Bolstered, she returned his smile. Not as a fan, but as a woman needing a man’s firm touch, followed by his regard, respect, and tenderness. Something crossed his face.

Pleasure? Passion? Both? Neither? She couldn’t read the emotion. Crap.

Tempering his earlier joy, he stepped deeper inside, homing in on her, Bree forgotten, no one else existing for him.

Andy entered the office, his auburn hair striking, his baby blues soulful yet also eager. The perfect combination in any man and ideal for a lyricist who wrote songs that brought her to tears. She liked his burgundy suit, gold tie and shirt, the colors outstanding on him. Unable to wait any longer for his smile, she grinned hard enough to make her cheeks hurt.

His preppy features lit up. He blushed then beamed, more beta than alpha.

Fine with her. He was a year younger than Max and Devlin, his response to her the greatest gift she’d known.

Devlin elbowed past both men, his dark blond hair swinging, his leather suit outrageous and totally him. Like Max, he was alpha to the core, at least during their performances and in entertainment articles she’d read. His tuxedo shirt and bowtie tamed him—somewhat. His beard-shadowed cheeks, upper lip, and chin showed what a bad boy he was. He winked.

Her smile approved of it and everything he was.

Bree cleared her throat and tossed the papers on the desk. “We’ll go over those details tomorrow. For now… Gentlemen, welcome. Max, Andy, Devlin, this is Jacquie Reynolds, my assistant. Jacquie, Dominant Men.”

They stepped forward as one, delivering their heat.

Max offered his hand first. She slipped hers inside his and almost died. His palm was calloused and hot, one thousand percent masculine, his touch firm yet tempered in strength. At six-three, he looked down at her, the stilettos not making a dent in their differing heights.

“Nice to meet you, Jacquie.”

His smooth, deep voice caressed her name. She’d never forget the sound. “The pleasure is mine.”

No lie, given how she melted inside. However, her tone remained even, not betraying her arousal or anxiety.

He offered another killer smile and leaned closer, his brown eyes so dark they looked black.

His scent washed over her, something fresh and aquatic, similar to the sea. Fitting for a man who resembled a pirate. Wild. Unrestrained. Commanding. He was definitely starring in her first romance. She shook inwardly.

Devlin offered his hand next, crowding out Andy who either didn’t mind being one-upped or wouldn’t show it.

Not liking Devlin’s behavior, she gave him a cool look.

He smiled sheepishly and bobbed his hand up and down, reminding her what to do next. “It’s great to meet you, Jacquie. I hear you have no equal in your work. I don’t doubt it for a second.”

At his praise and silky baritone, her disapproval crumbled faster than a sandcastle during a hurricane. His solid grasp said he wouldn’t let go anytime soon. Exactly what she needed from him in bed. “I do my best. I’m delighted to meet you, too.”

He stroked her thumb.

Pleasure blossomed within her. She reeled.

“I’d say we’ve waited far too long to meet.” He brushed his lips over her knuckles, his stubble rough, mouth ungodly soft.

Another second of him being his devilish self and she’d beg him to do her then ask the others for the same. His sensual, bold fragrance enthralled, a spicy-musky scent bringing to mind torrid summer nights, satin sheets, and naked flesh.

Before she lost what scant control she had, she eased her hand from his, ready to meet Andy.

He regarded her boobs, plumped by the dress, then met her gaze, with naked craving in his eyes.

His brief intensity surprised her, his grip as impressive as the others, but also friendly and caring. His scent proved minty, pleasant, and masculine.

It should have calmed her. Instead, her desire shot into the stratosphere. “Hey.”

His grin stretched ear to ear. “Hi. Great to meet you, Jacquie. Thanks for showing us around tonight. I’m sure you have other work you could be doing.”

Loving his rich voice, she shook her head hard enough to make the earrings tap her jaw. “Not in the least. That stuff can wait until tomorrow.” She looked at Bree. “Right?”

Bree struggled not to smile. “It’ll be waiting for you at your desk when you come in. Until then…” She regarded the guys. “Have fun. Enjoy Surrender. Let your imaginations run wild.” After giving Jacquie a knowing look, she ushered them from her office.

And there's a Rafflecopter!