I don't often make personal appearances, which in my line of work are readings, lectures, booksignings and the like. I used to before the internet took over the world and relegated personal appearances into second place behind internet marketing, which in my mind is really more efficient. I can reach more people with the touch of a button than I can by giving ten thousand readings, especially since few people show up to them. I've attended booksignings with not one but two best-selling authors who had hit the NYT list, and was shocked by the few customers they attracted. Humiliating to give a party when no one attends.

So I was surprised at my own enthusiasm for appearing in San Francisco at the Center for Sex and Culture to give a reading--that event will take place next Saturday evening, August 30 at 7 pm. I'll be there along with several other well-published erotica authors. And not only am I enthusiastic about it--I essentially created the event along with M. Christian, another author I "met" online. Chris lives in SF and has been a part of the scene there for quite a while, and get us set up at the CSC. He has confidently predicted that 30-50 folks will show up, each ponying up $10 for the privilege of hearing me and others read our work. Maybe they'll buy a book or two. Who knows?

Anyhow--I'm beset by doubt, to say nothing of the question of what readings to give and what to wear--damn important in my mind.

Here's a snippet from Desire in Tartan to pique your interest in the event:

She gave a little nod, but stopped, aware that he couldn’t see her in the darkness. But p’raps he had seen, for he used one deft hand to part her thighs and push his rod deeply into her."

Aaahhhh…” His groan and hers harmonized as his shaft forced its way past tight muscles and he was again parting her, opening her, creating a special space for him to nest. 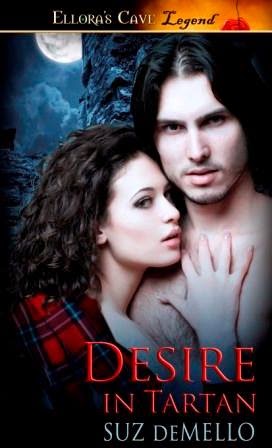 The mingled pain and pleasure undid her, and she cried out.

He went instantly still, though he didn’t withdraw. “Mistress?”

She sought to slow her frantic pants, and he waited until her breaths had evened. “It’s…I’m all right,” she managed to say.

He bent his head to kiss her again with great gentleness. She entwined her fingers into his hair, his glorious mane of wild, black hair, reveling in the smooth slide and feel of it across her palm as they kissed.

He started to move inside her, a slight thrust and wiggle that was about all she could take. Through the haze of pleasure clouding her mind she wondered how he could know exactly what she needed, how he could divine her feelings so truly.

If you can't make it to the reading, get the book here:
http://www.ellorascave.com/desire-in-tartan.html

Saturday, August 30th, 2014
The Center For Sex And Culture
1349 Mission St, San Francisco, CA 94103
Doors at 6PM, Event starts at 7PM
Admission: $10
And as for the initial question--what do you think? Has the internet supplanted personal appearances as far as writer promotion is concerned? Please leave comments below.