Today I hope you're hooked by this kinky, wild office romance.

Designer Shelbie Nathanson resents Rick Saldano’s ascension to C.O.O. of her family’s shoe empire, a job she’s wanted all her life. But she finds it hard to resist when she discovers his imagination in the bedroom is a match for her creativity in the boardroom. His interest in peep toes, slingbacks and stilettos goes beyond the purely professional and into the deeply kinky.She can't resist his red-hot, sexy style of lovemaking... one that focuses on her passion: shoes. 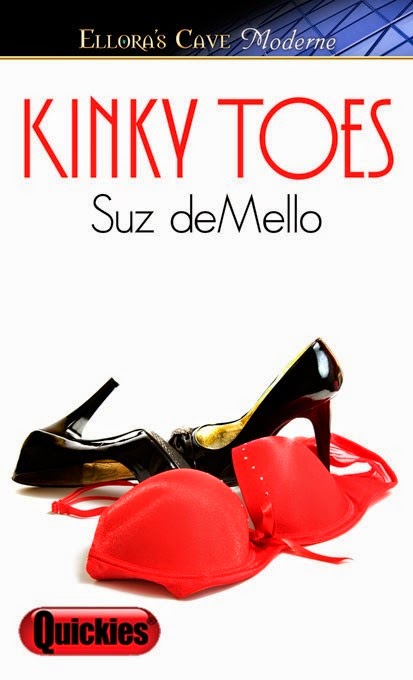 Here's a little snippet with a lot of sexual tension to pique your interest:

In the cab, she became even more aware of him, if that were possible. He was big. Not fat, but solid, sizable, with broad shoulders and an obviously muscular body beneath his suit. She couldn’t help sneaking a peek at his crotch. The suit’s fabric had pulled tight as he sat, tight enough that she could guess that six-foot-two Rick’s body parts were proportional.

Her mood had definitely changed.

He leaned closer, hesitated the tiniest fraction of a second before he brushed his lips against her cheek. Shocked, she jerked away, but he didn’t move, his gaze still pinned to hers.

This is a blog hop! Find other authors' sexy snippets here: