This has been a banner year for boxed set anthologies, those collections of excellent reading that usually retail for between 99 cents and $2.99. They're great for the reader, of course, and not too bad for struggling midlist writers like me. My books sell far better in a collection than they do as standalones.

After you read it, decide: is my heroine, Cara Fletcher, a fashion star or a fashion victim? 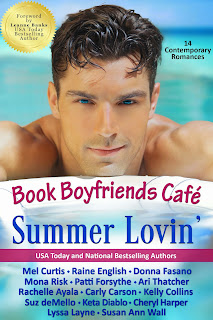 I stared at the forbidding courthouse, repressing an unnerved shudder. The four-inch stiletto heels had been a big mistake. I’d worn them to add so height, since five-four isn’t exactly impressive. Better, the gorgeous periwinkle suede matched my suit. But, given the slippery-looking stone stairs outside the building, as well as my morning tranq, I had to struggle, picking my way to avoid falling on my butt. I told myself it was okay, since I still had twenty minutes before the nine o’clock hearing.
Even so, I clung to the rail with a death grip. Once inside, I passed through security and then found the correct floor. My attorney had said we’d et outside the courtroom, but I didn’t see her.
A trio of males outside one of the courtrooms grabbed my attention. One of them raised his head to give the eye, and even took a step away from his group. Despite the seriousness of the situation, I couldn’t help responding.
Hot wasn’t a hot enough word to describe this guy.
Unfashionably longish hair with silver streaks. A maverick. He wasn’t afraid to buck the trend toward brush cuts and no doubt would never dye his hair to look younger. But despite the hair and body—big, solid, and buffed—it was his eyes that grabbed in the gut and wouldn’t let go. They were an unusual shade of hazel. Golden, really, feral and predatory, like a wolf. Or maybe one of the great cats. A lion or a cougar.
His face was all bold planes, with high cheekbones, a strong jaw, narrow but sensual lips. And a small scar by the side of his mouth . . . how had he gotten that? A knife fight? A beer bottle in a bar brawl?
I silently laughed at myself. He probably fell off his bike when he was six. But still, he was hot. Very hot. Beyond hot.
His gaze caught mine, and my temperature shot from ninety-eight-point-six to at least one-oh-two in a second.
A set of nearby double doors banged open, and I blinked, jolted. A redheaded woman in chic brown tweed burst into the hall, followed by a phalanx of attorneys, bees swarming their queen.
“I didn’t pay you thieves a grand an hour to get screwed!” she scread, her stride an angry clatter on the stony floor. Buzzing with temper, the group rushed by. I stayed upright until the last attorney in the swarm plowed into .  The jerk didn’t stop, though my feet slipped on the marble.
At my side in an instant, the mysterious, amber-eyed stranger grabbed 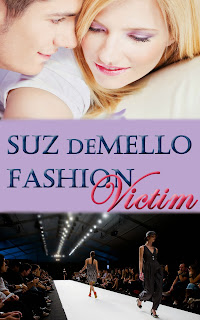 before I hit the floor. He lifted onto my feet with a gentleness at odds with his size, his strength, and the uncivilized gleam in his eyes.

“Are you all right?”  The stranger’s pleasant bass had a slight, sexy  southern accent, which turned me on even more. What was it about a southern accent? Sothing about it called up all my Rhett Butler fantasies. I was a sucker for a southern accent.
He straightened my lapels without brushing my breasts, which tingled anyway. Embarrassed, I tugged at my jacket as he again gave the once-over.  “You look fine,” he said, emphasizing fine, “but I’m afraid you’ve torn your stockings.”

I looked down. He wasn’t lying. One of the knees of my pantyhose had ripped. I sighed. “What else can go wrong today?”
He laughed. “It’s not so bad. Look at it this way. You aren’t paying soone a thousand dollars an hour to get screwed, are you?”
We shared a chuckle. “You’re right,” I said. Then I staggered a few steps away toward the won’s room before recalling my manners. “Umm, thank you for your help. I hate to seem rude, but I have a very important court appearance, and I can’t have a run in my hose.”
I hurried down the hall as fast as I could without risking another fall while digging in my satchel for the spare pair of pantyhose I hoped I had in there.

When I erged, the hall was empty. Sweat broke out all over my body as I sprinted for the courtroom door. I scurried in as a bailiff was calling, “All rise!”
I found my seat next to my lawyer as the judge, an older balding fellow, entered with a flutter of black robes. He thumped his gavel to begin the hearing as I looked down the long wooden counsel table.
Then I saw him. At the opposite end of the table. Well, hell. Was the hottest of the hot my opponent? My opponent’s attorney?
I t his glance then tried to look cool, calm, collected and in control, but the reality was that everything I cared about was on the line.
The bailiff announced the case, and a man sitting next to the hottie stood, buttoning the jacket of his navy pinstriped three-piece suit. “Michael Muckenmyer of Muckenmyer, Radcliffe and Soas, representing the plaintiffs, Fletcher Tool and Gear, Inc., and Fletcher Wolf, who is present.”
Fletcher Wolf. I should have known. I had the bad luck to have fallen instantly in lust with my enemy, a man who could tear apart my life and destroy every one of my dreams.
Brilliant. Absolutely brilliant. I recalled what I’d said to Wolf outside the courtroom. What else can go wrong today? Now I knew.