Sooooo...what's an amanuensis, you ask?

Oooookay...so what's this story about?

Poetry is like blood – you can’t hold it back.
The Emperor has decreed that Reason will rule in his lands. Art and literature are banned in favor of  military technology. The fearsome Preceptors prowl the capitol, arresting anyone who dares, even secretly, to engage  in forbidden activities.
A former teacher and frustrated writer, Adele is grateful for her job as secretary to the enigmatic Professor. During the day, she transcribes his learned  treatises on a vast range of topics. Then  he calls her to his room one night, to give her a more difficult and intimate assignment, one that risks both their lives. 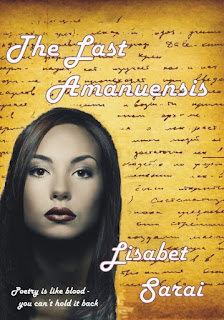 Excerpt
I saw relatively little of the professor during the week. He spent his days in his basement laboratory, which was strictly forbidden to me, or shut away in his study, presumably filling new notebooks with observations and innovations that I would eventually be required to type. I'd leave my neat stacks of typewritten pages on the table outside his door so as not to disturb him. I worked in the small parlor across the hall and took my meals in the kitchen with the taciturn cook.

On Sundays, however, he and I dined together. After a glass of sherry, his chilly manner thawed a bit. He'd quiz me about the information I'd been transcribing, initially to see if I understood what I'd read, but later to solicit my opinions.

He asked me other questions, too, questions that bordered on improper.

“Who is your favorite novelist, Adele?”

My heart executed a sudden somersault. Was he trying to entrap me? “Ah—I'm not sure, sir. Of course I haven't read any fiction since His Excellency rose to glory and urged us to abandon such frivolous pursuits.” I scanned his face. The deepening creases at the corners of his eyes belied his serious tone.

“But you did read, when you were in your teens, did you not? Before the Ascension? A mind as nimble as yours must have devoured everything you encountered.”

My fear ebbed, though I remained wary. Meanwhile, his compliment kindled a warm glow in the pit of my stomach. “Yes. I did read a lot—before.” His lips twitched and his icy gaze softened, inviting my confidence. I basked in his rare, concerted attention. His interest, the sense that he viewed me as worthy, urged me to recklessness. “I used to write, too. Crazy, fantastic stories about impossible quests and eternal love.”

The smile I'd heard in his voice finally bloomed. “I'm not surprised in the least. Nor am I shocked, Adele. Be reassured of that.” To my astonishment, he covered my hand for a moment with his own. His cool, dry palm whispered over the backs of my fingers before withdrawing. Blood heated my cheeks, as if I were still the young girl we were discussing, and a disturbing heaviness grew between my thighs.

“They—ah—were silly things,” I stammered. “Trash. A waste of mental energy, as the Emperor has said.”

“But you poured yourself into those tales, I'm sure. They were part of you.” Those crystal-blue eyes of his gleamed, luminous behind his glasses.

A new wave of panic swept me. What was going on? I pushed my chair back from the table, eager to excuse myself and end this disturbing conversation. “If you'll excuse me, sir, I'll retire now. I've something of a headache.”

For an instant I thought he'd stop me. Then his smile fled and his body collapsed into itself, his advanced age suddenly obvious. “Very well. I'll see you tomorrow. But tell me—what happened to those fantastic stories of yours?”

My throat constricted around an impending sob. I could scarcely get the words out.

“I destroyed them, of course.”

My employer regarded me gravely. “Right. Of course.”

From my elementary school years, when I devoured everything I could find by Asimov, Heinlein and Bradbury, I’ve been drawn to speculative fiction. Now that I’m an author myself, I create my own futurescapes. My visions are sometimes bleak —but always illumined by desire.