Love Me Some Cowboys…
I can remember when cowboys were all the rage in romance and then a few years back they were considered passé by some publishers. Baloney. I’ve always loved strong, virile men who know how to wield tools and ride hard. Very hard. J

One cowboy is heaven, two are my fantasy.

I’m relatively new to indie publishing, so when I learned one of my fellow authors and friend was starting up Under the Sun Publishing, I wanted in. Ann, the owner, is extremely talented and she’s honest. A great combination.

Once she corralled a group of authors for the first set, I wrote Make Me Breathless, my cowboy fantasy. Colt and Lucas aren’t only hunks and Alphas, they’re genuinely good men. Just what Ally, my heroine has needed for so long.

I’m thrilled about the Falling in Love set and my novella’s inclusion. 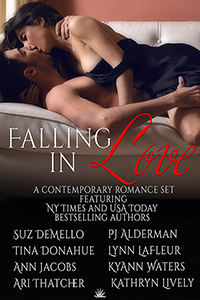 You can drool, but no licking the screen. J

Blurb:
These rugged cowboys know what they want…the biker chick who just became their neighbor.

When Ally inherits a Texas ranch, she’s not about to trade in her Harley for a horse or a cow. However, she is taken with the McCrays, two deliciously virile cousins who own the adjoining land. Lucas and Colt’s lean, hard bodies are a major delight as she watches them work their property then strip to skin to cool off in the creek. Maybe it’s time to meet her neighbors.

Colt’s never known a woman quite like Ally, sultry yet vulnerable and totally clueless when it comes to ranching. Hell, what kind of man would he be if he didn’t offer to help? Lucas feels the same. Both men want to give her some fun, Texas style. Long, hard, and thorough.

Ally’s certainly game for a good time, yet the sweetest surprise is what follows.

About me:
I’m an award-winning, bestselling novelist in erotic, paranormal, contemporary and historical romance for Kensington, Samhain Publishing, Ellora’s Cave, Siren Publishing, Booktrope, Luminosity, Decadent, and indie. Yay! Booklist, Publisher’s Weekly, Romantic Times and numerous online sites have praised my work, and trust me, I’m forever grateful for that. I’ve had my books reach finals in the EPIC competition, one title was named Book of the Year at a review site, and others have won awards in RWA-sponsored contests. I’m actually featured in the 2012 Novel & Short Story Writer’s Market. Talk about feeling like a freaking star. Before my writing career, I was the editor of an award–winning Midwestern newspaper and worked in Story Direction for a Hollywood production company. Outside of being an admitted and unrepentant chocoholic, I’ve flown a single-engine plane (scary stuff), rewired an old house using an electricity for dummies book, and have been known to moan like Meg Ryan in When Harry Met Sally whenever I’m eating anything Mexican or Italian. Yeah, I like to eat (burp).

You can check me out here – yes, I am everywhere!  J