She's through with love and just wants to have some wicked fun - with TWO hot cops! WICKED TIMES TWO by #TinaDonahueBooks #menage #SouthFlorida #HotCops #Tattoos

I loved writing this story. Noah and Kyle are so freaking hot, I'd love to take Jasmina's place in their arms.

I'm hosting a FB party on January 26th to celebrate my release. There will be guest authors, contests, giveaways, eye candy, and more! Please join me and the others. 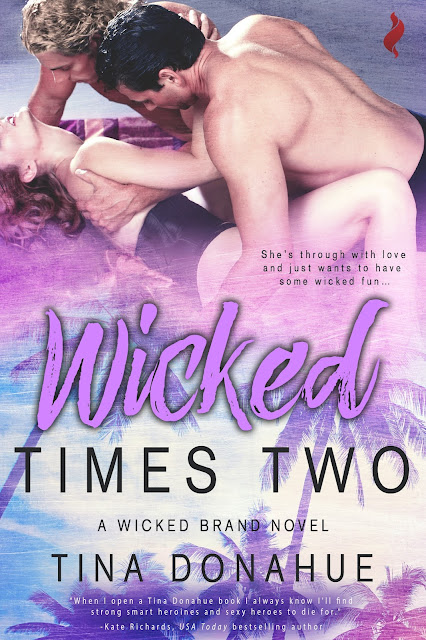 South Florida just got a helluva lot steamier… During the day, the staff at Wicked Brand makes ink dreams a reality for their appreciative clients. After hours, this naughty crew engages in sensual delights as wild as the designs they’re selling. Their motto? Nothing forbidden. Nothing held back.

She’s through with love and just wants to have some wicked fun...

Burned by her cheating boyfriend, Jasmina is finished with the idea of forever after with any guy. That fairy tale doesn’t exist—at least not for her. From now on, protecting her heart and letting pleasure rule is her motto.

Lucky for her, she has the perfect men in mind. Noah and Kyle, two of the hottest cops in West Palm Beach. She hasn’t been able to get them out of her head since they handled an altercation at Wicked Brand, the tattoo parlor she manages. When they come back to get inked, sparks fly.

Noah’s ready to play, and Kyle’s on board. All they want is her—submission, bondage, spanking…no strings or regrets. Seductive days roll into steamy nights, igniting feelings the guys hadn’t expected and Jasmina can’t deny.

What began as a sensual adventure could turn into so much more…if Jasmina can risk a different kind of love. 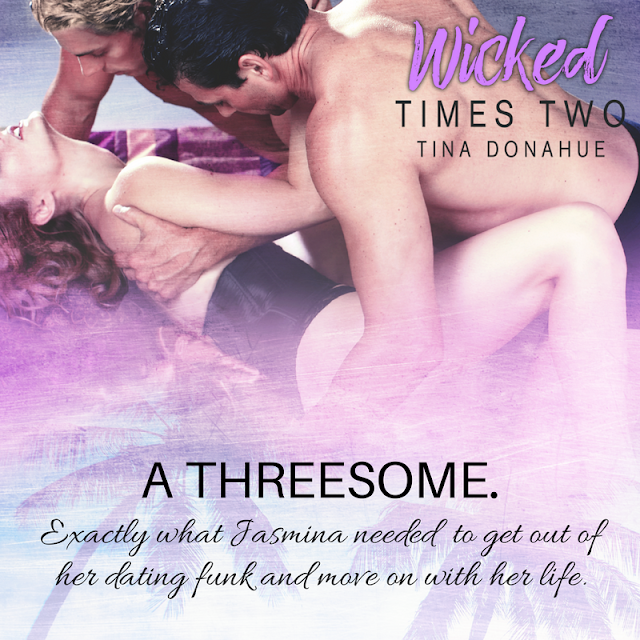 Kyle and Noah strode inside, wearing their cop authority like a second skin.
Jasmina fought dizziness, drawn to them effortlessly and recklessly.
Tor hurried past the guys and reached her first.
She ignored him.
Kyle’s fragrance wafted close, an intoxicating cedar and suede mixture. She struggled against taking another sniff, not wanting him to think she was weird, but it wasn’t easy to restrain her desire. The disillusionment in his eyes had faded, replaced by male interest…almost as if he couldn’t help himself.
Nice.
He smiled at her, the gesture easygoing yet confident.
She liked that.
Noah brought up the rear, his scent tobacco, with a hint of coffee and musk. One thousand percent male, like his assured bearing and attentive gaze.
Ambrosia to a woman who hadn’t had fun in months.
Her cheeks stung. So much for playing things cool. “Hey. What’s up?”
Kyle rubbed his mouth, but it didn’t entirely hide his smile.
Color darkened Noah’s face.
Jasmina had to keep from leaning over the counter to check out the prizes between their legs and asking if they were still seeing the women they’d brought to the wedding. Or maybe they had someone new? She hoped not. “Is everything going okay with the trial? Ethan didn’t bust out of jail, did he?”
Kyle laughed. “Nope.”
Noah chimed in. “He wouldn’t dare.”
Their voices rumbled; her lust spiked to overdrive. Calm down before you make a fool of yourself.
It wasn’t like her to become unglued around guys. She’d always been herself whether they enjoyed her personality or not. Of course, Noah and Kyle were the first men she’d been interested in post-Brad.
Maybe that’s why Tor stood to the side like a chaperone.
She knew she’d been in bad shape after being cheated on, but she didn’t like or need his intrusion and turned to him. “Can I do something for you?”
“I’m good.”
“Awesome.” She slapped on a smile and gestured to the waiting area. “Your client will be glad to hear that. He’s ready to get inked.” She lowered her voice. “He’s the elderly man wearing the bright orange shorts. Nice guy.”
She gave Tor the work order that detailed the tat the man wanted: a 3-D design on his left pec that depicted an opened zipper. From inside his heart, his late wife smiled at him.
The sweetest gesture Jasmina had ever seen. If only all guys were loyal to the ones they were supposed to love.
Wasn’t going to happen, especially to her.
With the forever-after fantasy in her rearview mirror, she was ready to cut loose and enjoy herself. Not once but twice. Wicked times two. She faced Noah and Kyle, attracted to both and eager to know what it would be like to be with them at the same time. A threesome was the safest way she knew to have fun and indulge in her carnal fantasies while also protecting her heart.
However, whether they would go for the idea or think she was crazy was a huge if.
They shot loaded gazes at Tor.
He fired one right back but collected his client.
“Hey, I’m Tor Avana.” He stuck out his hand. “Ward, is it? Nice to meet you.”
“Same here.” They shook. “Hope I’m not too old for this.”
Jasmina cut in. “Not at all. Go for it.” She gave him two thumbs-up.
He laughed softly.
“This way.” Tor gestured for Ward to take a seat in the front chair.
The poor man shrank back. “You’re going to tattoo me in public?”
“Sure.” Tor clamped Ward’s shoulder. “It’ll be fun.”
“Oh no, please.” He waved his hands. “I wouldn’t want anyone except Sheila seeing this old body.” He lifted his droopy shoulders. “She loved me. She didn’t mind how I looked.”
Jasmina’s throat tightened with emotion. “It’s okay. Tor can ink you in his workstation in the back. Totally private.”
Tor gave her a look. She gave him one right back, annoyed at his behavior today.
He ushered Ward down the hall but kept glancing over at her, Kyle, and Noah.
Jasmina recalled when she’d first started to date. A big thing, given she was the youngest in her family, not to mention the only girl with six brothers. Her mom and dad had been pretty cool about the whole thing, trusting their daughter to make the right choices and not to be a pushover for anyone. Her brothers were a different story.
Tor had shot the same look to Noah and Kyle that her brothers had given the guys she’d dated, which said, “Back off.” Until Brad had messed with her heart and dignity, Tor had never questioned her good sense. She knew she’d been hell to live with around here, acting like a damn zombie. But that was in the past. She was ready to move on, and he should trust her to know her own mind. The last thing she needed was a damn bodyguard. She regarded Kyle and Noah. “Something bothering Tor?”
Kyle lifted his eyebrows slightly. A mellow response that told her nothing.
Noah showed no reaction, his mood reserved, thoughts masked, taking her in as though it was his right. Just as a cop would do. Pure authority.
If he behaved the same in bed…
A pleasant thrill ran through her, dulling the outside world. Sounds and colors faded.
For him to play Dom to her sub would be the absolute best. After he worked his wicked ways on her, Kyle would be there for comfort and tenderness. They could even switch things up, taking turns playing good cop and bad. To have their passion released at the same time… 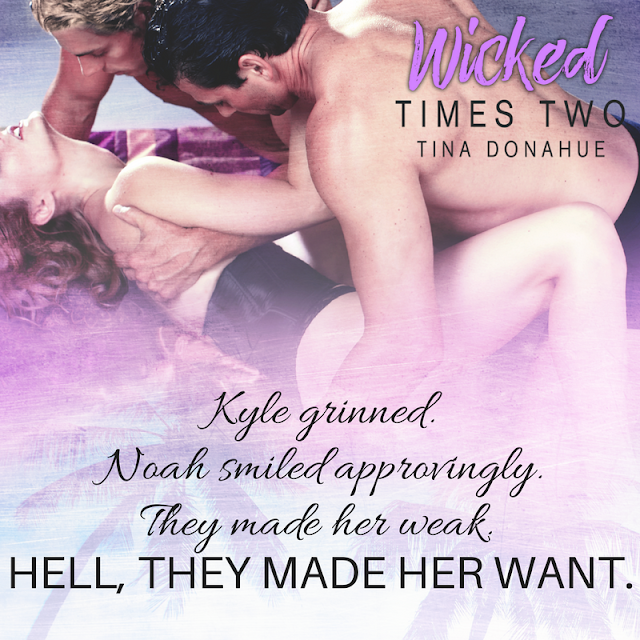