Feel the magic with "GYPSY WITCH"

It's a hoodoo Halloween!

My gypsy witch lives in the very mundane town of Sacramento, but she's anything but dull, as this scene reveals:

Elena stepped between the rogue knight and the cops. “Get thee gone.” Her voice was a low growl as she confronted Sinister. She tossed one last substance onto him, then ripped the topaz from around her neck, breaking the chain. She thrust it at Sinister. Power flowed from the gem. Golden rays spurted from between her fingers and arced toward him. He was thrown violently backward and up into his niche. He melted into the stone.

The night was suddenly still. The rain and lightning stopped. The wind died 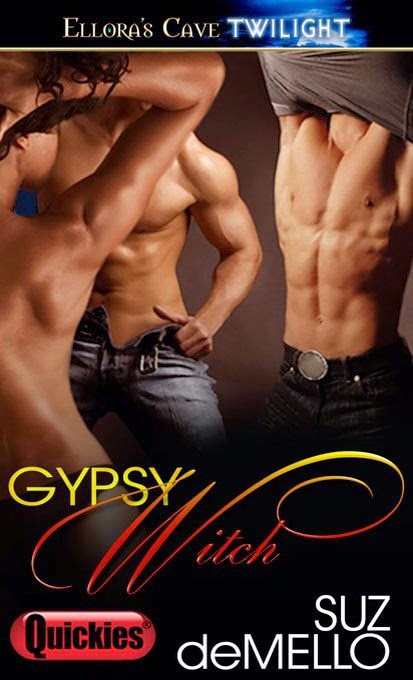 down. Elena unclenched her fingers and dropped the topaz into her pocket. The gem’s residual glow pulsed through her skirt’s thin cloth. She sighed and said, “Okay, show’s over. Into the car with you."

Here's what the story's about:

The Sacramento Sheriff's Department is no place for airy-fairy wimps, and Ben McCullough is the toughest of the tough. He tells himself he's bedding the luscious Elena Lautari only because she's a babe, not because she's a card-carrying member of the Northern California Church of Wicca. Ben thinks she's a feather away from an arrest for fraud, since she makes a living telling fortunes and making charms for the lovelorn. He can't see her as a lifelong mate even though she's more than a match for him in the sack, and losing her is unthinkable.

If you like what you read, get it here:
http://www.ellorascave.com/gypsy-witch.html

This is a blog hop and a Halloween party! Read other talented authors' writing here:
http://wp.me/p3qRAb-vI
Posted by Suz de at 12:00 AM