A Hot Encounter from FOR MY MASTER--a foursome, anyone?

The edict from TPTB at the Book Boyfriends Cafe weekly blog hop is to give y'all a "Hot Encounter" between our H&H. Or, in the case of menage authors, our H&H&H. Or maybe, as in the below scene, our H&H&H&H.

Here's part of the hot hot hot scene. Don't want to give you too much--you'll have to read the entire story for that! 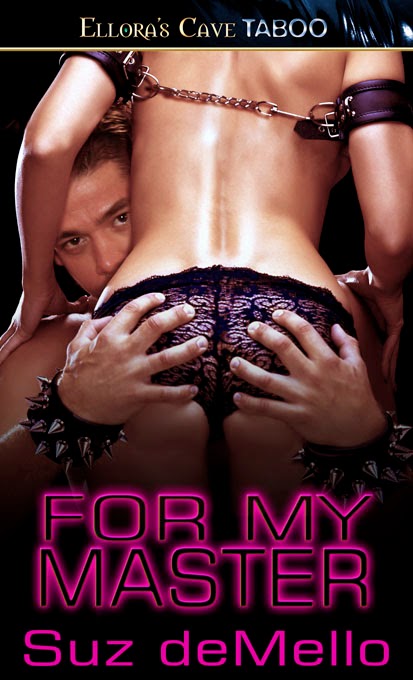 Toby pulled Kathie's thighs apart. Her hips jerked involuntarily and she moaned. Darla chuckled and tugged on the nubbin of proud flesh before plunging one long, red-tipped finger into Kathie’s slit. Excitement shot through her. She cried out, startled by the invasion, more shocked by her response to a woman.

Ross leaned over and thrust his tongue into her open mouth as she came, his hands on her breasts. Darla withdrew and massaged Kathie’s clit.

Another hand touched her—a man’s hand, she thought. But the hand couldn’t belong to Ross—he was cupping her breasts and pinching her nipples, which was unbelievably arousing, combined as it was with Darla’s fingers in Kathie’s pussy. Toby was stroking Kathie’s inner thighs up and down with gentle fingertips. The lazy caress kept her pulsing.

She didn’t stop coming until Darla stopped. Ross straightened to unzip his shorts while Toby urged Darla to bend over the table between Kathie’s spread legs. Darla kissed Kathie’s naked cunt while presenting her raised ass to her partner, who lifted her skirt and opened his pants. He had a long cock—not as thick as Ross’s or as dark, but quite a tool nevertheless. Kathie’s pulse quickened as she watched, watched and anticipated with a rush of honey moistening her pussy. She pushed her cunt harder into Darla’s lips.

Toby fondled himself for a moment then aimed his rod to enter Darla from behind with a long, slow surge. Darla’s gasp sent warm breath floating over Kathie’s clit while she watched Toby grip Darla’s round hips as he took her.

She’d never thought she’d take part in such a dirty, sexy scene and didn’t know how she felt about it. The she remembered what Ross had said. Just let go…

Here's what the story is about:

Agent Kathie Belmont has long lusted after her boss, Ross Guerrero, but has never plucked up the courage to even flirt with him. Could he be the strong but tender Master she craves?

Ross wants Kathie in his life—on her knees. But the constraints of their jobs with an ultra-secret US security agency have come between them.

Find the short story at http://tinyurl.com/bxlg762

This is a blog hop! Check out other Hot Encounters:
http://www.bookboyfriendscafe.com/2015/02/hot-for-friday-hot-encounter.html